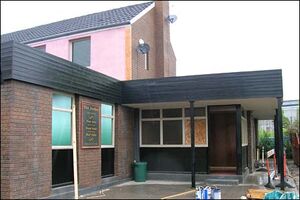 The Jockey is the local pub on the Chatsworth Estate currently run by the Maguire family.

At the start of the show the Jockey was run by Jez but after she left the pub. current lodger Karen Maguire took over. Jamie Maguire also bought in but in Series 6 sold his half of the pub to Joe Pritchard. Series 7 saw Mimi Maguire running the pub, though with Jamie and Karen still living there. Currently Karen and Jamie are back in control, though until late in Series 8 Karen wasn't considered a licensee as the Maguire's managed to manoeuvre it away from her when she was considered unstable due both to her Bipolar disorder and the temporary break in her relationship with Jamie.

After Karen and Jamie rebuilt their marriage Karen grew restless over the fact the Maguires had taken her pub away. She set into motion a slow scheme in which she and Jamie would play cards and the loser could choose a kiss, dare or demand. Karen continued these games for a while, often losing and being forced to kiss Kelly or winning and asking for silly things such as for Jamie to kiss his brother Shane to throw him off guard. Eventually she lured him into another game after making him swear to adhere to anything she asked for if she won, once she had won she seductively unbuttoned Jamie's trousers and put her hand into his underwear before demanding to have her name back above the pub's door as landlady. Jamie, who has already promised to carry out her wishes, was forced to do just that.

In Series 9, a large mass of people from the estate were evicted from their homes and horrified Karen convinced Jamie that they had no choice but to let some of the homeless stay in the Jockey. Jamie was reluctant at first, citing the fact that it was very likely against their license agreement but he agreed eventually. However when the ruthless head of the project that was evicting people, Carmen Kenaway, discovered this fact she contacted the brewery and got the Jockey's license revoked. Thoroughly annoyed by this point, Jamie announced that to beat her they would give their alcohol away and did just that. However once Jamie was able to renew the alcohol license he revealed to a shocked Karen that he had been lying and considered all the alcohol they had given away as being "on tab".

The Pub has been refurbished twice; the first time was after Marty Fisher set fire to the toilets on Veronica Fisher and Kevin Ball's wedding day.[1] The second time was after Victor, a briefly hired chef, threw a molotov cocktail through the window after being fired for stealing money from the till (though the money was actually stolen by Ian Gallagher).[2]

During Series 7 a photograph of Mandy Maguire was added to a shelf behind the bar, it remained there afterward.

Most of the residents of the Chatsworth Estate regularly frequent the Jockey, however there are some background characters that almost always appear there though have had little to no activity in any storylines. These include:

In earlier series of Shameless Frank Gallagher and others are regularly seen buying Ecstasy pills from behind the bar. Frank in particular is shown to take ecstasy extremely regularly and it is likely such sustained use would cause low moods and behavioral problems in real life.

Later series do not show drugs being sold from behind the bar but as it is run by Jamie Maguire, the head of the drug selling crime family, it is likely they still are.

Door sign before Karen got her name added back.