View source
watch 02:56
Doctor Strange in The Multiverse o Madness - The Loop
Do you like this video?
Play Sound

Stella Ianna Princess Gallagher was born at the end of Series 5. Frank stated that he did not name her after the beer Stella Artois, but because she is "a little star". Her middle name is Ianna, as a thank you to her half brother, Ian, who helped deliver her, and also as Frank's way of apologizing to Ian for yet another row over his parentage.

Like her siblings, Fiona, Debbie, Liam and Carl, Stella has taken control of the Gallagher household at a very young age, becoming a skivvy for her father and surrogate brother, Aiden. She is becoming more assertive, as she performs a number of chores, and even plays pranks on her father and Aidan by shaking up their lagers before giving it to them. She shows her capabilities as a caretaker, as she took care of her brother Ben Gallagher.

She does love her father, who became her primary caretaker once her siblings left and she still calls him "Dad". Stella was excited to see him after his release and hugged him, though he wasn't too interested in her nor her activities. Even when given the chance of a better life with Fiona, she wanted to stay with her father and went to search for him. She was later sad at him calling her a mistake but was very happy when he not only apologized but confirmed that he did love her.

She gets along with her siblings, who often tended to her as a baby. Stella was very happy to meet the ones who were out of the house, such as Lip and Fiona who both felt guilt at leaving her with Frank.

She is born in the finale of Series 5, with her father, sister, and three brothers being present.

Since her birth, Stella has been cared for mainly by Debbie, Liam, Carl, Libby and Patty, in the absence of either of her parents, as per custom in the Gallagher family.

In Episode 1 of Series 6, she appears to communicate with her parents telepathically and even narrated the episode, though this is likely a drug induced hallucination on their part or a half serious idea on the part of the writers. She was voiced in that episode by Kelly Condron.

Stella is a background character but is seen growing up.

Stella appears to be growing up fast, by this point all Stella's main care givers were gone so she is most likely being cared for by Frank, Aidan, Marty and Kelly.

She is quite clever being able to cover for her father when police came to arrest him for taking part in a riot. Frank thanks his daughter for her convincing performance, as she calls it easy.

Unlike her other eight siblings, Stella was brought up without a big family around her. She had yet to meet some of her siblings. However, she is seen regularly with Aidan Croker who accepts her as family.

Stella finally meets her oldest brother Lip in Episode 11.8, as well as her niece Katie (who's also three years her senior). Stella and Lip connect with him apologizing for leaving her with Frank. Katie and Stella form a bond with one another, to the point where a concerned Katie was reluctant to leave her six year old auntie on her own when Mimi came to take her away from the Gallagher house.

In Kiss Kiss, Bang Bang, Stella is tended to by Frank and Derilee. Her father walks her to school, since he is the janitor but she has to leave early because of an emergency. She goes home and has tea with Derilee's husband Baxter before her father comes home and he finds her with Baxter. Stella tells her father that she's making tea, as he is horrified by the intruder. Due to her presence, Frank uses her as a way to protect them both from the gunman. Stella is kept oblivious to the danger and Frank makes sure to keep her close, especially when Baxter argues with his wife. She also meets her mother for the first time when she arrives. When the police try to shoot Baxter, Frank quickly pulls Stella in the house, saving her. She is put in bed after the experience. At the end, she parts with Derilee after being given an early birthday present.

In the final episode of Episode 1114 End of the Line, Stella was excited her father was back from jail and hugs him but he hardly paid her any mind. Stella becomes an older sister for the first time to new Gallagher sibling, Ben Gallagher. She begins to deal with the stress of looking after a baby, with both of her incompetent parents present. Fortunately, Monica's reaction to losing baby Ben's twin in the womb was to contact the rest of the family. Fiona came, thinking Monica had a miscarriage. Stella meets her older sister Fiona for the first time and they bond for a while. But realizing the true situation at the Gallagher home, she becomes determined to help her two youngest siblings escape the life they're doomed to endure in Frank and Monica's care. Despite being left with Kev Ball by Fiona temporarily, Stella decides to walk out with her brother in her arms and find her father. She finds Frank in the street, after his spat with Monica, where she claims to want to stay with him but he blames Stella, as well as all his other kids, for ruining his life, and tells her that he's leaving. Saddened, Stella complies with his request to leave with her brother. Afterwards, a guilty Frank later finds Stella and Ben outside a park, he tries to apologize for his earlier words. She refuses to go with him since he told her to go away and called her a mistake, as women from the park think Frank is harassing her. Frank tells them he is the children's father but Stella says Frank isn't her father and he explains that she is in a mood though Stella still states he isn't since her father wouldn't yell at her and he'd spend time with her because he'd love her. Frank states he does love her while she sees he is honest and smiles, forgiving him as he realizes his words and sees they were true. Stella goes to play on a swing, leaving her father with her brother as she does. Frank then clears up situation with the women and tells the women he was telling the truth as they realize the situation and apologize for the misunderstanding.

The three return home together, where she witnesses the argument between Fiona and her parents over what is better for her and Ben. When Fiona states their parents don't care for any of them, Stella speaks up to say that Frank mentioned that he would be happy to walk away from his responsibilities by getting on a bus but he didn't. She watched as Fiona inquired on this and willingly handed their father some cash for him to walk away free. However, he hesitated in taking the money, something Fiona noticed and shrewdly stated that Frank can't walk away because in truth he couldn't live without the family, establishing he does care. With that, Fiona, Carl, and Lip continue to entrust Frank and Monica with their siblings after seeing they've changed. 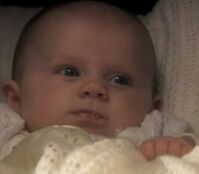 Stella as a baby.