Shameless Wiki
Register
Don't have an account?
Sign In
Advertisement
in: Articles to Update, Maguire Family, Characters (UK),
and 2 more

This article needs to be updated to include more recent events, is in need of a picture or requires sources of info. You can help the Shameless Wiki by expanding it.

Micky Maguire (1985-) started out as a paranoid, aggressive, violent man who followed in his brother's footsteps but his acceptance of his secret homosexuality made him into the kindest member of the Maguire family. He had a brief and casual relationship with Ian Gallagher just after his first appearance on the show, which being his first gay experience left him with strong feelings for him. Their relationship may have blossomed into something more meaningful but Ian was disgusted when he heard how Micky had his dog Nelson give him oral sex when he had broken arms.

Despite Ian letting him down semi-gently, they became firm friends and Micky continued to chase Ian for affection, albeit irregularly.

Micky was originally just like the other Maguire boys, violent, aggressive and mean, but since coming to terms with his sexuality he has become a much more kind hearted and warm person. Always trying to mediate between older brothers Jamie and Shane's arguments and looking after his baby sister Cilla more than their mother at times.

Few people, not including his family, know that he is gay. He has come close on several occasions to "coming out of the closet", but something always seems to make it a bad time. However in more recent series he is much more obvious, making odd comments and doing activities usually deemed feminine yet not one member of the Maguire Family has exhibited more than a confused look.

In Series 8, Micky moved into the abandoned flat where Marty Fisher had been living. Micky had threatened to leave the Maguire homestead if his mother didn't change the boiler he was adamant was dangerous. Kelly, who had been growing close to Marty since his return, suggested Micky move into his squat as Marty was sure to be happy of the company. This living arrangement lead to Marty becoming one more person aware of Micky's homosexuality, when Marty jumped into the bath with Micky and at his shocked face told him not to worry as he wasn't gay, leaving Micky to motion that he was. Marty panicked at this knowledge at first but very quickly came around and re-joined Micky in the bath where he asked him what kind of man he liked.

Micky decided to help Marty see his children again and when Marty explained Sue would never allow the children to see him unless he had a safe and clean home, the two began to turn the squat into a real home. Micky assumed Marty wanted to win his wife back and hoped to help his new friend achieve this but he soon realized the truth when he saw Marty and Kelly's awkward behaviour. Micky warned Kelly to be careful and when she denied any feelings for Marty, he told her she was lying to herself.

It is possible that Kelly is aware or at least suspicious of Micky's homosexuality as in Episode 821 Billy Tutton called him "gay" and Kelly's eyes widened while he spluttered and threatened Billy.

Micky continued to live with Marty even after a pregnant Kelly left Shane and moved in. Micky enjoyed being around the couple, referring to them as the "three musketeers" but Kelly was far from like minded. Micky's lack of consideration for house hold issues such as using all the milk led to her putting her foot down and forcing him to move out. He sadly packed his belongings only for Kelly and Marty to be evicted at the same moment.

In Series 9, Micky visited a gay sex hook up spot for some "company". The man he met there ended up being a straight "gay-basher" however and put Micky in the hospital. After being released Micky tracked down his attacker and planned to kill him but decided not to go through with it and settled for scaring the man with a sword.

Later, Mimi complained about a customer owing the family money for drugs and said he needed a "visit". She planned to send Shane as she felt Micky wouldn't be threatening enough, though this only spurred him on to try and prove himself. Micky visited the man and after some violence, collected the money only to end up being trapped by the man's dog when he ran. Worse still, he was trapped in a room with the man's girlfriend - who was in labor. Micky ended up helping to deliver baby Jasmine but the mother died shortly after giving birth. Knowing the father was a drug addict and unfit parent, Micky took Jasmine home with him. When Mimi found him with the baby, she was shocked Micky by suggesting he keep her, as it could be his only chance to be a father. Micky told his mother he needed to tell her something, presumably that he was gay but she interrupted him to say that he didn't need to say anything. Micky left the Maguire house with Jasmine, with only his mother being there to say goodbye and wave him off. It can be assumed from this that Mimi was aware that Micky was gay, but she just didn't feel the need to speak about it. 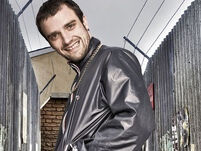 Micky earlier in the show 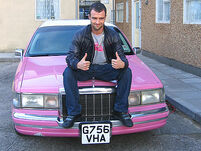 Micky with his famous fuchsia limo