This page is about the original UK Shameless' Marty Fisher. For the US version of the character, see Marty Fisher (US).

Martin "Marty" Fisher is the son of Carol Fisher, and brother of Veronica. Marty has Tourette's Syndrome coupled with Hyper Mania and is also a pyromaniac. He was a guest character in the first series, became a main character (along with his mother) in Series 2, and left along with Veronica and Kev in the first episode of Series 4. At the time of his departure from the series he was dating Sue Garland. He returned in the later half of Series 8, claiming to have divorced Sue after she cheated on him but it was soon revealed he had been keeping a few secrets. After his return Marty got increasingly close to Kelly Maguire, his brother-in-law's sister.

He went with Kev and Veronica to Romania in the gap between Series 3 and 4 where the infertile couple were buying a baby. They were caught by police and Kev and Veronica were jailed but Marty managed to escape with the baby. He wanted to raise the baby with girlfriend Sue who was against the idea completely, but local police officers Stan and Tom soon took Marty into custody for the illegal baby. A pregnant Sue had a change of heart and tried to use her early breast milk production to convince them the baby was hers, and while the PC's weren't convinced they could see the baby would have a better life with the couple and let them leave. Marty and Sue then left the Chatsworth Estate to raise the baby as their own, along with their unborn child.

Marty returned to the Chatsworth Estate in Series 8 and told a surprised Kelly how he and Sue had got married and moved to Spain. He explained how trouble had arisen in his marriage and Sue had cheated on him with a Spanish man, she threw Marty out and though he turned to his usual habit of arson he was forced to sleep on the beach. He eventually made him way back to Chatsworh, but was forced to hide and wear a balaclava when leaving the abandoned flat he was living in because he had warrants for his arrest because he hadn't been able to pay child support.

He showed that he was able to stop shouting obscenities because of his Tourette's Disorder, but still made occasional noises and twitched as a result. Kelly took pity on where he was forced to live and appealed to the Maguire's to let him sleep on the couch, but worried about the arson in his past and baby Cilla picking up his swearing they refused. Kelly still took him some bedding so he would be more comfortable, brushing off his hints that he would like to pay her for sex, she decided to have a pizza with him, asking for extra basil. Marty returned with the pizza and an actual basil plant which the two laughed about, but when she returned home and explained the plant to Shane he went berserk and attacked Marty. Kelly tried to stop Shane and was disgusted by his behaviour, and when Shane told her not to see Marty anymore she gave no answer. Later Marty stopped her on her way home from work and blurted out that he loved her, Kelly was shocked and couldn't think of an answer so just walked away.

Kelly and Marty continued to grow closer, seeing each other occasionally behind Shane's back. At some point Marty visited Kelly as a customer and paid her for sex, a fact Shane was aware of surprisingly. When Micky moved out of the Maguire house Kelly suggested he move into the squat with Marty. Micky soon noticed how Kelly and Marty reacted around each other and suggested that they both wanted him to move into the squat so they could have an excuse to see each other. Kelly denied this but Micky told her that if she couldn't be honest with him, then she had to be honest with herself.

Marty later resorted to armed robbery to get his hands on some money with Micky supplying him a gun. Kelly only found out when she found the Maguires happily enjoying a laugh at the security footage which showed a masked Marty's inept attempt. Shane took Kelly aside and mentioned that he could tell it was Marty and that the police were offering a £10,000 reward for information but Kelly reminded him that Maguires don't report people to the police. Kelly then gave a tearful and angry reprimand to Marty while Shane looked on the Internet and discovered that Sue had died in a house fire along with her and Marty's two children. This called into question everything Marty had said since returning to the estate, as he had even pretended that they were coming to visit and acted crushed when they didn't arrive. Shane cornered Marty and explained what he had discovered before admitting he had told the police where he was and advising him to run. Kelly found out the next day when Micky explained the police had raided their flat, Kelly realised that someone must have told the police before Shane walked in and admitted doing just that but anonymously he also told Kelly about Sue and her children's deaths. Kelly later met Marty after he text her and she angrily told him how she had fallen for him but he disgusted her for killing his wife and children just because Sue left him. Kelly continued to ignore phone calls from Marty until he sabotaged The Jockey lights and cornered her in the toilets, explaining that he had no part in his family's death and it hurt that even she could think he was guilty. He went on to tell her that he was leaving to start a new life and would be at a certain bus stop at 9am the next day, appealing for Kelly to leave with him. Realising where he heart lay, Kelly left a sleeping Shane in bed while she took a suitcase and went to meet Marty but she was late to the bus stop and found it empty, attempting to phone Marty she found his phone in the bin next to her. Marty apparently left the estate again.

Kelly admitted to Karen that she had unprotected sex with Marty and may be pregnant with his child. Kelly attempted to forget about Marty and repair her relationship with her husband but confirming she was indeed pregnant with Marty's child and unable to change her feelings she told Shane everything. A heart broken Shane all but begged her not to leave him, even being willing to raise the child as his own. This uncharacteristic weakness on Shane's part only made Kelly respect him less and he eventually became sadly resigned to Kelly leaving him. Kelly met with Marty soon after and the couple set up home on the Estate.

However, the loss of Sue and his children made me Marty too afraid to get involved with anything related to Kelly's pregnancy, fearing he was a jinx. Kelly struggled to change his mind, telling him that she could raise the child alone but she didn't want to. Early in Series 9 a kindly customer of Kelly's was left in a coma with brain damage after an accident, since he never wore a wedding ring Kelly assumed he had no one and spent time with him at the hospital, telling him how she planned to give up her job at the Brothel as soon as the baby was born. Kelly was soon shocked by the arrival of the man's wife however, pretending just to be a kindly stranger Kelly spent time talking with her and was disgusted to find the woman had been about to leave her husband for another man. She cited her husband's complete lack of interest in sex as the biggest reason and this made Kelly so angry she told the woman her husband had no problem when it came to sex with her, admitting herself to be a prostitute. The wife was so shocked and hurt by this herself that she shoved Kelly, causing her to fall stomach first into the metal frame of a hospital bed before running away.

Kelly miscarried her child, left feeling numb in hospital she told Marty she didn't have the energy for him to make it all about him when he blamed his "jinx".

As of Series 9, Marty seems to no longer be wanted by the authorities.

Living at the Gallagher house with Kelly, Marty found stability and began working as a handy man/house painter. He and Kelly made peace in their relationship after the heartache caused by the loss of their unborn child and their relationship blossomed.

In Episode 6 of Series 10 Marty witnessed the death of a post man who was killed by a milk truck. Seeing how easily life can end Marty was inspired to propose to Kelly. He went to his storage garage and retrieved his grandmother's ring, the same ring he had given to his first wife Sue Garland. After a few mishaps, including dropping the ring down a used toilet, he went to Kelly's ex Shane Maguire to ask for his blessing. Shane gave his blessing but unwittingly revealed Marty's plan to propose to Kelly.

Marty at this time was having second thoughts, thinking Kelly would turn him down but she confronted him and he proposed in the middle of The Jockey. The couple care-free happiness was short lived however when Kelly found a letter that had been delivered to the house. A letter from Marty's son, from Spain. Realizing that his family, or at least part of it, may not have died in the fire, Kelly showed the letter to Marty.

Marty decided that the only thing he could do was go back to Spain to find out what happened and he left an upset but understanding Kelly to go to their engadgement party alone.

Marty is set to apear in Series 11 episode 4.

Despite disappearing toward the end of Series 10, apparently to discover where Sue Garland and their children were currently living, no mention is made about the incident during Marty's appearance in Series 11.

Marty and Kelly have come to live in the officially vacant No.4 Windsor Gardens, which vacated by the Powell family after the separation of Jackson and Avril. In Episode 113, Marty accompanies Kelly to a train station under, which is under police survelliance, to recover several grand from a locker. They find that there is far more money kept in the locker than Lillian stated. After counting the money, Marty decides to approach the Maguires for help to launder the money. With the help of Jamie Maguire and his newly-discovered half-brother, Kassi Blanco, forged insurance details are created for Kelly and Marty, who take the opportunity to escape their lives in the Chatsworth Estate.

In Episode 114, Marty and Kelly's application for a mortgage is rejected when their insurance details are discovered to be forgeries. As they are deciding their next course of action, Jamie Maguire, who's tryingto find somewhere for the Blanco family to live, orders Marty and Kelly to leave immediately. They decide to take their chances outside the Chatsworth. 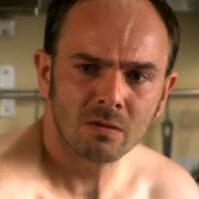 Marty earlier in the show.

Marty after his return in Series 8
Community content is available under CC-BY-SA unless otherwise noted.
Advertisement