This article is a stub. You can help the Shameless Wiki by expanding it.

Katherine "Katie" Gallagher (previously Maguire) (2006-) is the daughter of Phillip Gallagher and Mandy Maguire. She was born during Series 3 when a pregnant Mandy was knocked over during a robbery at the Karib's Shop. Katie is named after her maternal grandmother, Mimi Maguire.

After Mandy's tragic death in Series 6, Katie was briefly taken care of by Mimi until she was taken to London to live with her father Lip and his long term girlfriend.

Katie returns in Series 11 with Lip. When Frank is sat on a bus Katie (thinking that Frank is a stranger) pulls tongues at him, Frank watches Katie as she gets off the bus and realises who she is when she is greeted by Lip. When Frank bumps into Lip and Katie, he invites them round for dinner and Lip takes Katie on four bus rides to make her believe she lives far away from Franks house. Frank finds out that Katie and Lip lived close to the Chatsworth Estate and Katie has been visiting her grandmother Mimi secretly. Living with her father nearly all her life, Katie has learned to dress and act like a boy, which Mimi doesn't approve of, but Frank, whom Katie has formed a bond with, tells Katie that 'Gallagher's do it their own way'. 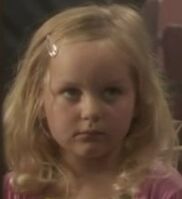 Katie as a child
Community content is available under CC-BY-SA unless otherwise noted.
Advertisement