Shameless Wiki
Register
Don't have an account?
Sign In
Advertisement
in: Articles to Update, Milkovich Family, Minor Characters (US),
and 3 more

This article needs to be updated to include more recent events, is in need of a picture or requires sources of info. You can help the Shameless Wiki by expanding it.

Jamie Milkovich is the cousin of Mandy and Mickey and nephew of Terry Milkovich.

Jamie is introduced in season one when Ian rejects Mandy's sexual advances causing her to send her family members after him in revenge[1]. Jamie is one of the three Milkovich's who try and hunt Ian down in this episode (the others being Mickey and Joey Milkovich).

In Can I Have a Mother, one of Mickey's brothers states that all the drugs were used up at a Quinceanera at Jamie's a week prior, implying that Jamie has, at this point, moved out of the Milkovich house.

Jamie is not shown again until season 10. In "Gallavich" Jamie is shown to be directing wedding guests to the Polish Doll. Terry Milkovich jumps on him and beats information out of him. 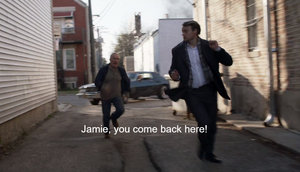 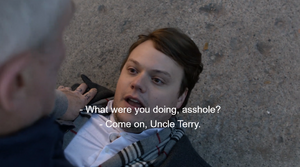 Jamie Milkovich confirming his relation to the Milkoviches by calling Terry his uncle.