Fergal Maguire is the least seen, and only deceased, son of Paddy and Mimi Maguire. He was murdered as retribution by the family of the man Jamie Maguire murdered. The only remains ever recovered of Fergal was his hand bearing a tattoo on the wrist, confirming it belonged to Fergal.

When the hand was initially found by Ian and Lip Gallagher, it was mistaken as a threat to Lip from Paddy as a result of their strained relationship following the birth of Katie Maguire. When it was realised it was meant for the Maguires it was initially believed to belong to Micky, it wasn't until Micky came home safe and the tattoo on the wrist was noticed that the true victim was revealed.

The Maguires then put the arm in a box and let it float along the canal as a form of funeral for their son. Fergal was buried in the cemetery of the local Catholic church and often visited by Paddy, it was his time spent at his son's grave that lead to Paddy meeting Maureen, with tragic consequences. In 2009 Fergal's sister Mandy was killed in an explosion caused by Maureen, an unstable woman who lost her daughter to heroin that was purchased from Paddy's crime syndicate. Mandy was buried with her brother and Paddy was seen visiting their shared grave during the christening of his grandson Connor.

It was implied in the last episode of Series 4 that Fergal had a falling out of sorts with his parents sometime before his death. Jamie later admitted that the reason he reversed his plea, in order to get an early release from prison, was so he could kill three of his father's former business partners and cellmates, who Fergal initially conspired with against his family. Earlier on in Episode 3 of Series 4 (i.e. the one where Fergal's death is announced), we see a tattoo on the wrist of Fergal's severed hand that reads 'dad' and 'mam', indicating that Fergal truly did love his parents sincerely, and despite the conspiring and betrayal on Fergal's part following his falling out with Paddy and Mimi, his sincere respect for his parents caused him to have a change of heart, which led to his murder.

It has never been confirmed if Fergal has been seen in person, with the first mention of him being after his death. However, judging from flashbacks of him in photographs during Series 4, he does compare to an extra background character briefly seen at Jamie's welcome back party (Series 4, Episode 402), so it is possible he was there. It is also unknown if Fergal is one of the early Maguire brothers (along with Donny and Joey) as seen in parts of the first three series, because Fergal is never credited (not even in Series 4) or referenced in name prior to when his death is announced.

It's worth pointing out that from time to time, Mimi still references Fergal, sometimes directly, or sometimes just as a number, acknowledging that she lost him, or even just that she is still his mother, which she strangely forgets to do with Donny and Joey, whose current whereabouts are unknown.

Photograph of the departed Fergal, as seen in Episode 8 of Series 4. 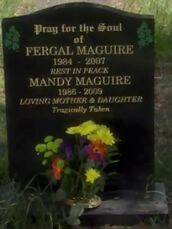 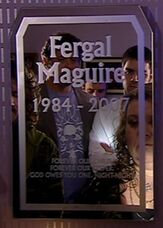 Retrieved from "https://shameless.fandom.com/wiki/Fergal_Maguire?oldid=26173"
Community content is available under CC-BY-SA unless otherwise noted.