View source
watch 02:56
Doctor Strange in The Multiverse o Madness - The Loop
Do you like this video?
Play Sound

This article is a stub. You can help the Shameless Wiki by expanding it. 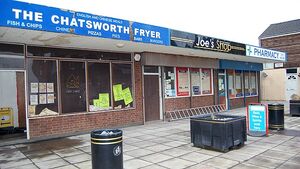 Chatsworth Estate (or simply Chatsworth) is a large council estate, ostensibly in Stretford, near Manchester. It has been home to many families over the years, including the Gallaghers and Maguires. Chatsworth is known as particularly "rough" and crime is a common and daily occurrence. Chatsworth was originally an overspilled garden-suburb during the post-war years. In Abduction, is revealed through maps that Chatsworth estate is actually located just west of Philips Park, situating it in Miles Platting, Manchester, with Bradford Road running through it.