William "Billy" Tutton is the teenage father of Cilla Maguire. In Series 7 Billy began an affair with a newly divorced Mimi Maguire but soon admitted that he was only 14 years old. Mimi was horrified and ignoring Billy's expressions of love, forced him to move off the estate. He later returned and pursued Mimi until the unlikely couple became lovers and then married.

Billy was raised by his single mother, whether due to his father leaving or being dead is never stated. Mimi began an affair with Billy when he began playing football on The Jockey's team and socializing with the Maguire boys. The couple never progressed to full sex but spent a lot of time together until Mimi happened across Billy one day in his school uniform, she fled in a panic and cornered him later to ask his age only to gasp when told he was 14. She quickly told him what they had was nothing, just sympathy-induced sex acts but Billy was adamant he loved her, ignoring his stated devotion Mimi told him to stay away and even threatened to kill him. Later in the pub Shane told his mother that Billy had been thrown out of the house for selling his grandfather's medication and Shane had invited him to stay at the Maguire house. Mimi cornered Billy again but this time it was her left scared when he turned on her and threatened to tell everyone what had gone on between them if she didn't have full sex with him from then on.

Carl Gallagher noticed the two meeting secretly and realized the truth and when a group of school mates of Billy's offered Mimi money for sex and told her Billy had told them everything she scared them away by threatening to hurt them with a glass. Carl saw her do this and told her he knew and that she needed to sort her head out which spurred Mimi to explain everything to him. Realizing just what was at stake Mimi spread a rumour around the estate that Billy was a paedophile and then arranged for Billy's aunt to agree for him to live there. She explained to a battered and bruised Billy that she wouldn't let him destroy her family life and when he called them a "gang of thieves and freaks" Mimi gave him once last chance to leave for good. He continued to refuse so Mimi suddenly produced a handgun from her bag and pointed it at a petrified Billy, she repeated his earlier statement that she wouldn't kill a kid before producing a second gun then handing it to him and explaining she wouldn't kill an unarmed kid anyway. The two stood pointing the guns at each other until Mimi angrily told him not to worry, that she would bury him with his "slag of a mother" when suddenly Billy pulled the trigger, a shot was heard and Mimi fell to the ground apparently dead. A shocked and scared Billy quickly gathered up his bags and fled the scene leaving Mimi alone on the floor, after a few minutes Carl walked in to find her and she got to her feet. Back to her calm self Mimi deposited the gun back into her bag and told a shocked Carl that it was lucky Billy fired first, as her gun contained real bullets.

At the end of the series Mimi went into surprise labor, giving birth to a baby she had no idea she has been carrying. Mimi named the child Cilla and loved her, but the strain of both the surprise birth and the fact Mimi never thought she would have children again resulted in Mimi later having a small break down. Mickey practically raised Cilla alone for a long period of time, before Mimi began to see how Mickey was struggling.

The identity of Cilla's father was originally unknown due to Mimi having flings with a long list of men to help her feel attractive after her divorce. It is unknown if Mimi knew Billy was Cilla's father all along or if she figured it out later, nonetheless when a 16 year old Billy returned to the estate and snatched Cilla in order to bond with his child, Mimi was forced to admit the truth to her family. The Maguires had mixed feelings on the matter; her son's admitted they had known for some time while Karen and Kelly were shocked at Mimi having sex with a 14 year old.

Mimi was confused over whether to allow Billy access and first denied it when he attempted to kiss her. She later warned that if he ever tried anything romantic with her she would castrate him. She later told him that if he wanted to be in Cilla's life he would have to show her son's that he was serious. Billy tried to bring the stubborn Maguire boys around by giving Mickey flowers only to be beaten with them, Shane whiskey only to be chased away with a knife and finding Jamie on the phone violently threatening someone he was scared from even speaking to him. Billy later told Mimi that he loved her, which she saw as proof he wasn't ready to be involved in Cilla's life but after some advice from Kelly she changed her mind. She made her way to The Jockey, threw all the residents out of a surprise birthday party for her and confronted her sons.

She was disgusted when they revealed a battered and bleeding Billy tied to a chair. She rescued him and reminded her family of occasions when she alone had stood by them before announcing that Billy was moving into the Maguire house in order to be the best father to Cilla.

Despite Mimi being so adamant to the contrary she and Billy quickly developed a romantic relationship. The began to burgle businesses together, more for the sexual thrill Mimi admitted they gave her than the money. On one of their break in attempts however, Mimi twisted her ankle entering the building only for them to set off a silent alarm and get arrested by the police. They were able to escape the police car when they noticed a seat belt stuck in the door, preventing it from closing properly and fled to an abandoned church nearby. The couple were still handcuffed together and soon began arguing, Mimi was unhappy about desecrating a church while Billy questioned her religious beliefs. Billy soon located a saw in the rubble and cut their handcuffs off before surprising Mimi by proposing, she quickly checked if he was serious before happily accepting.

The couple kept their engagement a secret, hoping to break it Mimi's sons gently and possibly worrying about the residents who had taunted Mimi for Billy's immature behavior. Their secret was revealed however when Micky caught Billy writing his wedding vows with Jackson Powell and Mimi was spurred to announce the engagement to both her family and the other residents in The Jockey. Billy soon began doing everything he could to avoid Jamie and the other Maguire boys. Jamie eventually cornered him, gave him a large wad of cash and demanded Billy leave the estate for good. Billy agonized over the decision but chose to stay, telling Jamie he would have to get rid of him "his way" before locking himself in the bathroom to cry in fear. Billy had to reason to fear however as Mimi gave an impassioned speech to her family, explaining how a now rich Paddy had begged for her to move to his new mansion and take him back but she had refused him. Her point was how she knew her own mind enough to refuse that dream life and wanted to live the rest of her life with her family. The boys felt for their mother and left Billy unharmed from that moment on, though Micky continued to scare him.

Micky and Jamie also helped Billy get into shape, using Steroids, so he would be physically strong enough to live like a Maguire. Billy chose Carl Gallagher as his best man and he and Mimi married soon after in a large church ceremony witnessed by all the Chatsworth residents. They followed this with a reception organized by Chesney Karib in the middle of the estate outside his shop.

Billy and Mimi's marriage struggled through many problems from an early stage, from Billy losing his ability to ejaculate to the couple deciding on an open marriage. The open marriage was hard for Mimi's family to accept but it was revealed to be her idea, mainly due to her insecurity and fear of not being able to give a younger Billy everything he desired sexually.

Eventually however, Billy broke down and revealed that he had only gone along with the open marriage to please Mimi and would much rather they were monogomous, even going so far as to beg her not to make him sleep with other women anymore. Realizing just how much Billy loved her, Mimi worked through most of her insecurities and the couple began a more tranditional marriage.

To celebrate their first wedding anniversary, Mimi and Billy renewed their wedding vows at The Jockey.[1] In a ceremony befitting the odd couple, they each wore the other's wedding clothes (Billy in Mimi's dress and Mimi in his suit) and exchanged new vows that included promising that should Billy ever become unable to ejaculate again only Mimi would "milk" him back to health. 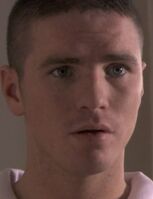 Billy and Mimi on their wedding day.

Retrieved from "https://shameless.fandom.com/wiki/Billy_Tutton?oldid=21770"
Community content is available under CC-BY-SA unless otherwise noted.