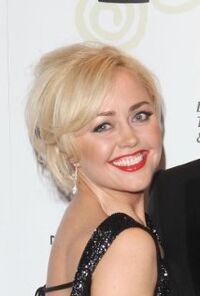 Angeline Ball was born in 1969 in Dublin, Ireland. She plays Gloria Meak in the Channel 4 TV dramedy Shameless.

She is an award-winning actress who currently resides in London. She is a trained dancer in ballet, tap, and modern dance. Her breakthrough role came in 1991 when she starred alongside Maria Doyle Kennedy and Bronagh Gallagher as backing singer Imelda Quirke in Alan Parker's The Commitments. From there her acting career blossomed and she has appeared in movies both in Ireland and in America. Most nobably she played Vada's mother in My Girl 2 for which she sang a rendition of Charlie Chaplin's Smile. She worked with Alan Parker again when she sang backing vocals on his Evita album. Ian Le Frenais and Dick Clement wrote the TV series Over the Rainbow for her.

In 2003 Angeline swept the board at the IFTA, winning Best Actress in a TV Program for her portrayal of Nora in the TV series Anytime Now and Best Actress in a Film for her portrayal of Molly in Bloom, an adaption of James Joyce's Ulysses. In March 2011 she reunited with her fellow The Commitments to play a number of gigs cluminating with a live concert at the O2 Dublin. She is currently working on an album and independent projects with her production company.

Angeline had a small part in the movie My Girl 2 where she sang an a cappella solo of the Chaplin song Smile.

In 1999 Angeline played the part of Cras Trenton in The Outer Limits episode The Star Crossed.

Angeline has appeared in many Irish films including Trojan Eddie as Stephen Rea's estranged wife, The General and The Tinger's Tale, both of which starred Brendand Gleeson and where directed by John Boorman. She was widely acclaimed for her performance as Molly Bloom in Sean Walsh's 2003 version of Ulysses entitled Bloom. Her co-star was again Stephen Rea as Leopold Bloom, who also directed her as Mrs. Gogan in a modern-day interpretation of Seán O'Casey's classic play The Plough and the Stars on the Dublin stage. Joycean scholar David Norris said that her Molly Bloom was the best that he had ever seen and she won the 2003 Irish Film and Television Award for Best Actress for her role in the film.

The many television dramas she featured in have included Brothers in Trouble, Our Friends in the North, Doc Martin, Any Time Now, Time Now, Bait, and What We Did on Our Holiday. She played alcoholic country and western enthusiast Annie Little in the 2007 Irish television series Trouble in Paradise. As Angeline is also an accomplished singer, she provided the vocals for the series' theme song.

Angeline has done voice-overs for the Irish children's program Jakers - The Adventures of Piggly Winks. Angeline appeared as Widow Quin in a modern-day interpretation of The Playboy of the Western World in the Abbey Theatre, Dublin.

On May 26, 2008, Angeline made her debut as Maggie Townsend, Bradley Branning's boss in BBC TV drama series EastEnders.

Angeline played the part of Bella, the girlfriend of Eddie Scrooge in a modern day adaption of A Christmas Carol set on a rundown housing estate.

Retrieved from "https://shameless.fandom.com/wiki/Angeline_Ball?oldid=24799"
Community content is available under CC-BY-SA unless otherwise noted.